PVC is the cornerstone of the blister. The aluminum foil is coated with a heat seal lacquer to allow the PVC to be sealed to the aluminum. In the early years, this lacquer varied from market and from product to product, and sometimes dealt with sealing the PVdC coating rather than the PVC.
The PVC film is generally either 200 µm (7.5 mils in the US, a slightly slimmer version) and 250 µm (10 mils in the US). These gauges traditionally offer sufficient material to form blisters of a size that conventional tablets, pills, and capsules can be placed in them and pushed out of the blister.
The PVC film is almost universally produced on a calender, is a “rigid” or “un-plasticized” material, with low residual monomer content and tailored shrink profiles.

The PVC film was produced in two plants; one in Gendorf near Burghausen in Bavaria, and the other in Weert, Holland. Hoechst also produced PVC resin in Gendorf. Genotherm was a Kalle trademark for packaging films, and it derives from an ancient Roman name.

Hoechst had a special emulsion resin with a low percentage (~7%) acrylic modifier grafted to it, resulting in a film free of metal stabilizer which also had some impact strength. This resin when converted to film offered a material acceptable to regulatory agencies first for direct contact with food and eventually for direct (primary) contact with medicines. Emulsion resins however were costly to produce and over time homopolymer suspension resins replaced them as stabilizer technology improved.

Gerhard Meyer: Myraplast
Gerhard Meyer (born April 7, 1910 in Dresden, died April 19, 1971 in Dernbach) was a German entrepreneur, businessman and inventor. In March of 1950 Meyer applied for a patent for the manufacture of air-filled balls made of PVC. Meyer began production of his product in Radebeuler’s industrial zone at a company he founded named G. Meyer Plastics. Soon Meyer installed a calender next door to the toy plant. In 1953 this plant was named Myraplast (from Meyer Radebeul Plastic). Both plants expanded as demand in the West for his products was strong.

Continued growth of Meyer’s companies brought him problems in the late 1950s. He transferred ownership of the toy company to his brother Horst Meyer and renamed it Plastolit. Meyer continued development work of his PVC products including transparency films and curtain type materials. These resulted in numerous early patents for PVC film and sheet products and the building of a brand: Myraflex Cortina. In 1958 the East German government was “invited” to participate in the company.

In 1960 he emigrated to West Germany. It is believed that he first sought work at Hoechst and was refused as his preparation was commercial and not technical. He restarted Myraplast in Staufen. Later he moved to Montabaur where he was a key player in the founding of Klöckner Pentaplast.

In 1960, Gerhard Meyer immigrated to Staufen and went to work to re-start Myraplast. By 1962 he formed Myraplast Staufen Gmbh, with an initial capacity of about 200 tons of PVC per year. He could not obtain sufficient funding and later in 1962 sold the company to Alusuisse.

Under Alusuisse the company began to grow and develop various markets for uPVC calendered films. In 1965 Alusuisse renamed the company Kunststoffwerk Staufen. In 1969 Staufen took over production at a Pegulan plant in Bötzingen and changed the name of the company to Vereingte Kunststoffwerke GmbH (VKW). The two plants (Staufen and Bötzingen) produced about 11,000 tons per year.

Then, in 1974 as part of ongoing Alusuisse restructuring, VKW was integrated into Lonza. Finally, in 1983 VKW was acquired by ICI. Production had increased to 23,000 tons per year. 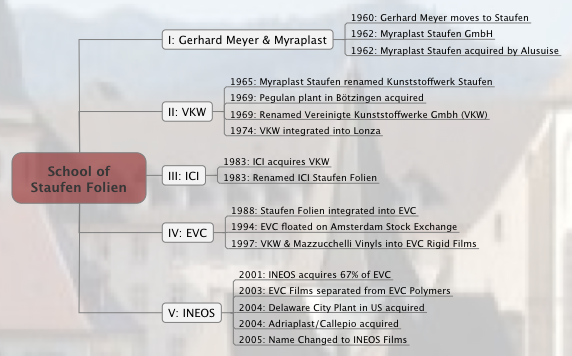 It is believed that Myraplast Staufen provided the PVC used by Schering in the Anovlar® blister. There is one example of Myraplast Staufen material used in a pharmaceutical blister at the Zurich University of the Arts – Museum of Design which can be seen by clicking here. It is a Ciba product, Noracyclin, and Myraplast is listed as the producer (”Herstellerin”).

Tenneco’s 1025 MCFD formulation used a calcium zinc stabilizing system that complied with FDA concerns about metal stabilizers used in materials for food contact. Demand for uPVC products grew, as food companies like American Can, Oscar Mayer and Kraft Foods introduced new containers to the US market. When SHPC announced that they would no longer make the US – 2000 product available, Tenneco moved ahead aggressively in the pharmaceutical marketplace. The Drug Master file was in place. A concerted effort was made with calls on the major pharmaceutical houses and working with the contract packagers (PACO, Sharp, Packaging Coordinators, Anderson Packaging, Sauter etc.) to get the packages in for testing so that the individual products could be included in existing and new NDA’s. Tom Ambrosio (from Schering-Plough) recommended Mirrex 1025 as a viable alternative to the SHPC product for new NDAs. The rest is history.

In 1984 American Hoechst purchased the product and production equipment to make Mirrex 1025 and moved it to the Delaware City plant.

In 1963 Hoechst Kalle decided to enter the US market by forming a Joint Venture with Stauffer Chemical Company. Dr. Karl Winnacker from Hoechst and Hans Stauffer from Stauffer Chemical – both heads of each of their respective companies, were schoolmate friends. Stauffer had a resin and CS2 plant already in place in Delaware City. The new film plant built directly in front of the Stauffer resin plant combined Stauffer flexible PVC and Hoechst rigid PVC technology.

In 1964 Stauffer Hoechst Polymer Corporation (SHPC) opened in Delaware City, DE in front of the Stauffer resin plant. SHPC began producing two Genotherm films – US 1001 and US 2000, both listed in DMF 952.

Hoechst imported 1001 until the plant was built. US 2000 required the emulsion resin (SF7) produced by the Stauffer plant. In 1970, Stauffer sold its interest in SHPC to Hoechst and decided to discontinue manufacture of SF7.

The resulting exit of US 2000 from the marketplace meant that Tenneco’s Mirrex 1025 became the film of choice in pharmaceutical applications.

Klöckner Pentaplast
Thanks to Harry van Beek and Heinz Gärtner for this information.

Gerhard Meyer – founder of Myraplast – left Staufen and moved to Montabaur. There, in 1964, he convinced Klöckner Werke to start a plastics film and sheet manufacturing operation. The name Pentaplast comes from the “5 (penta) men who started the plastics business at a steel company, but in truth there were “7 Schwaben” (Sieben Schwaben) who brought the know how and the support for the plant and production of Klöckner Pentaplast PVC films in 1964 :

Evolving Paths of Learning In PVC
Alfred Chandler often refers to “evolving paths of learning” when he speaks of the strengths of industrial firms in the 20th century. (Chandler, Alfred D. Shaping the Industrial Century…) By 1965 a first stage the evolution of PVC films used in pharmaceutical packaging was completed. Hoechst, Tenneco, Staufen and Klöckner Pentaplast were all established as organizations where the developmental, production, marketing and distribution capabilities continued to evolve over the next decades as each competed for its piece of the pharmaceutical market.

Over the next forty years these pioneer organizations would buy, sell, and consolidate each others and newcomers as the market evolved to meet new challenges. The market saw national industries created to challenge what was originally a German & US technology. Italian and Japanese PVC suppliers first challenged the incumbents. Eventually all of the Italian suppliers were acquired and consolidated into the evolved version of the incumbents. Japan ended up being the one market that moved away from the path of learning in PVC. Emerging markets saw emerging PVC suppliers as well. But by 1965 the core learnings were established and in many ways remain today.

In Memoriam – John Bitner  All of us at Montesino pause to remember a colleague, friend, and industry icon, Joh…

You can find out more about which cookies we are using or switch them off in settings.

This website uses cookies so that we can provide you with the best user experience possible. Cookie information is stored in your browser and performs functions such as recognising you when you return to our website and helping our team to understand which sections of the website you find most interesting and useful.

Strictly Necessary Cookie should be enabled at all times so that we can save your preferences for cookie settings.

If you disable this cookie, we will not be able to save your preferences. This means that every time you visit this website you will need to enable or disable cookies again.